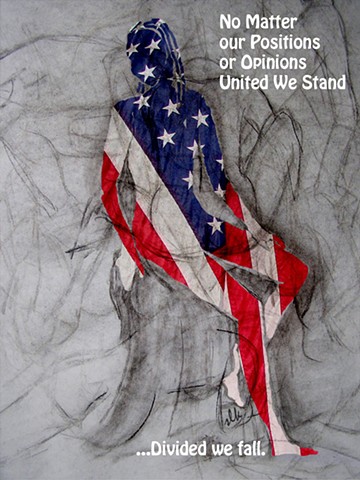 "American Choices" ~ Patreon Post Aug 20 at 11:03am "Recently I was asked what I think about the removal of Confederate Monuments and the U.S. drama unfolding as a result of those events. As an artist, my first reaction when the media began to spin the hype around these events was that these are art. This art reflects and documents our nations history. Reckless and ill-thought removal or destruction of them destroys history and destroys art. How can that be productive or constructive?

But then, I had to ask myself; "Which history do they reflect? Are they a symbol of a false history which denies the culture imposed upon those who were forced to come to this country against their will? Are they sugar-coating the reality of that? If not, should they be taken down?" Original Post with PYO version of this art

LATER ON SOCIAL MEDIA September 29th 2017 "Empathy, not zealotry under the guise of patriotism, is the only way meaningful discussion can be had." ~Mudge Rudiger " Kneeling in reverence for those who have served while acknowledging that our Nation needs to do a better job?" I asked with details from the back story. Then, added a correction to the post UPDATE: It has been brought to my attention (Thank You, Dad.) that, “You do not kneel when presenting the flag you bend slightly at the waist.” I did think that sounded a little off and should have taken the time to verify and make note of it before posting. But, it is also true that though misinformed; the apparent intention was to show reverence and NOT to dismiss the efforts of our military, etc.

MY INTENTION in sharing this post is to indicate the importance of opening our minds to explore the history of things and circumstances behind them instead of falling in with the "hype" attached to them. No matter what that "hype" or spin might be... [Here is a link about the protocol for the presentation of the flag at a military funeral.]